The Ultimate Dumbbell Bicep Workout You Need For Massive Arms 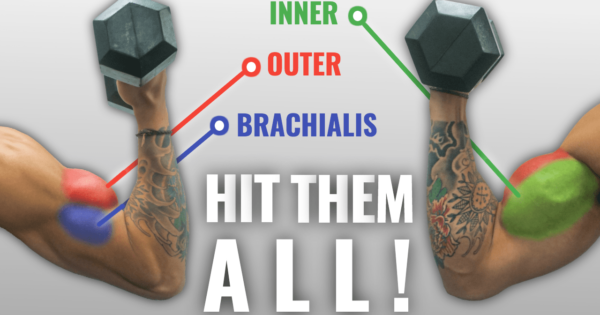 Want bigger biceps that visibly pop under your sleeves? Thankfully, building bigger arms isn’t challenging. In this article, I’ll go through the best dumbbell bicep workout that targets each part of your biceps, so you add the muscle mass you want to your arms.

If you’re looking to get bigger biceps, you need to incorporate enough bicep exercises with dumbbells into your workout routines. But – why free weight?

So, if you’d like to find out how an intense dumbbell bicep workout can boost your biceps growth, do stick around.

I’ll be covering the best bicep curl exercises with dumbbells you need to add the size you want. If you only have access to dumbbells, please continue reading too. You’ll find tons of value for your regular dumbbell bicep workout here.

As you probably already know, you can favor the inner part of your biceps more by placing your arms slightly in front of the body during the curl. Therefore, when it comes to short head bicep exercises, dumbbell concentration curls top the list.

And it doesn’t just target the short head portion of your biceps either. According to the following two EMG analyses (ACE and SuppVersity), it tends to outperform other common biceps exercises in terms of eliciting the highest biceps activation.

Why? The researchers speculate that when you have your upper arm pressed against your leg, you’re unable to sway your arm as you curl. As a result, you’re forced to initiate the movement with your biceps, rather than momentum.

The movement restriction also minimizes the involvement of your front delts during each rep. You’re, therefore, able to better isolate the biceps, leading to enhanced muscle activation. Which explains why it’s a must-have in any well-programmed dumbbell bicep workout.

However, there are a few critical points to take note of to maximize concentration curl’s effectiveness.

#1 – Grip the outer part of the dumbbell

You can maximize the activation of the biceps’ short head by combining the flexion of the arm with the supination of the wrist.

But why am I so sure? Take a look at this EMG analysis.

So how does this translate to your training? You’ll want to turn your wrist out to bring your pinkies toward the ceiling as much as possible.

And to take this one step further for even more bicep gains, you can grip the outer part of the dumbbell instead of the middle. This grip alteration will shift more weight into the pinkies of your hands.

There’ll be a resulting increase in the degree of active supination needed to curl and twist the wrist. And we know what that means. More significant involvement of the biceps’ short head, leading to a more intense dumbbell bicep workout!

After your regular set is complete and you can no longer perform additional reps, don’t stop. You’re not done with your dumbbell bicep workout!

You can continue the set by performing a few more reps with assistance from your non-working hand during the concentric part of the curl. Then, slowly let the weight down without aid during the eccentric movement.

According to an EMG analysis, assisted reps can significantly boost the activation of biceps by enabling you to continue working with a weight you otherwise would not have been able to.

As you should know, you can preferentially target the long head of the biceps by placing your arm behind the body when performing a curl due to its anatomy. In addition to enhanced long head activation, the incline dumbbell curl also wins out other biceps exercises in its unique strength curve. A crucial player in any dumbbell bicep workout.

According to a paper from the Journal of Sports Science and Medicine, the incline dumbbell curl elicits a relatively high neuromuscular activation of the biceps throughout each phase of the curl. This sustained activation is in stark contrast to other biceps exercises, where the biceps are best activated in the beginning, or the end of the movement.

Incline dumbbell biceps curls’ activation advantage, therefore, leads the researchers and me to recommend it as one of the best outer biceps exercises.

However, its effectiveness depends on how you execute the exercise – as with all exercises. Here are some key points to keep in mind.

Keep your elbow pinned and locked in place; this minimizes any front delt involvement. Undoubtedly, you’ll fatigue during an intense dumbbell bicep workout.

So a few degrees of elbow movement is all right, but it should not be excessive to the point where your delts begin to take over.

You don’t want to cheat by rolling the shoulders forward. Doing so reduces the range of motion that you put your biceps through, and you may start to involve the traps as well.

Instead, keep your shoulder-blades pinned back as you perform each rep. Maintain this posture even when you begin to fatigue; you’ll minimize the tension placed on unwanted muscle groups and maximize the growth of your biceps.

Lastly, I’m going to cover one of the key exercises in a dumbbell bicep workout – the dumbbell hammer curl. You may be wondering, “Hammer curls vs. bicep curls – what’s the difference?” Well, the hammer curl targets the brachialis. It’s a key exercise to include in any well-rounded dumbbell bicep workout. In addition to being responsible for the mass of the outer arm, the brachialis also anatomically pushes up the biceps.

This ‘push-up’ action helps you create the illusion of a more full and thicker-appearing arm.

How can you achieve this much-coveted illusion? By effectively targeting the brachialis, of course. And you can do so by playing around with your grip through hammer curls.

Due to the anatomy of the biceps, as the degree of pronation increases – and the biceps tendon winds more around the radius – the potential for maximal force development decreases. And the brachialis is forced to take over as a result.

Accordingly, if you were to grip the dumbbell with a more pronated grip (like holding a hammer), you’d direct the tension towards the brachialis, instead of the biceps.

According to a 2001 paper from the American College of Sports Science, you can further enhance the involvement of the brachialis by slowing down the eccentric portion of the curl.

What does this mean for your arms training? Well, if you want bigger-looking arms, you can’t go wrong with implementing a 5-second slow eccentric during the way down for each rep. You’ll be able to isolate the brachialis to a much greater extent.

So, here’s a quick summary of the bicep curl exercises with dumbbells I went through. Each of them targets a specific portion of the bicep – long head, short head, and outer bicep.

If you’re planning to incorporate them into your very own dumbbell bicep workout, here’s the recommended sets and reps.

Feel free to do this as a workout on its own or split it up, and add one or two of the exercises to your existing routines.

I would also suggest playing around with the order of the biceps exercises. Why? Well, because we know that lifters typically experience more significant gains for exercises done early on in a workout.

So – if your long head or outer bicep, for example, is noticeably lagging in comparison to your short head or inner bicep, you can perform the incline dumbbell curls first. This way, you’ll prioritize your long head’s development.

I hope you enjoyed learning about one of the best dumbbell bicep workout available, guys. And just remember like I’ve said in the past: if you want to build muscle and stop wasting your time in the gym, you not only need to choose the right exercises but you also have to perform them in the way that’s been proven to be most effective.

That’s exactly why within my Built With Science programs, we’ve not only carefully selected each and every exercise included in your step-by-step routines, but we’ve also taken the time to create in-depth tutorials for each exercise showing you how to optimally perform them to build muscle.

Click the button below to take my analysis quiz to discover the best program for you:

I hope you enjoyed this article and found it useful! Don’t forget to give me a follow and connect with me on Instagram, Facebook, and Youtube as well, in order to stay up to date with my content. Be sure to let me know how your dumbbell bicep workout went!

By the way, here’s the article summed up into a YouTube video: